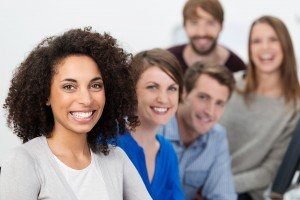 It happened again just last week. A gentleman at a roundtable I was facilitating made the argument that Millennials are just like any other generation. There are indeed life cycle effects—things that are similar for every generation at specific seasons of life. Most of us know better than everyone else when we are 25, right?! However, there are period and cohort effects that give each generation unique perspectives. The recession of 2008 could be considered a period effect…how it influenced a 22-year-old who had $50,000 in student loans and no job prospects was different than how it affected a 60-year-old who lost their job of 30 years and half of their retirement savings. One result for that 22-year-old is that he or she is unlikely to have the same confidence as older generations to commit 30 years to one job or rely on the stability of investing in a home or retirement funds. Unfortunately, this will often be criticized as irresponsibility or a lack of commitment, rather than a survival instinct!

While period effects, how events influence us at specific points in our life, are significant to the development of any generational cohort, I believe it is the cohort effects that truly make Millennials one of the most unique generations in American history. Cohort effects are how trends influence us during critical developmental stages of life. When we look at Millennials, we see the confluence of several incredibly significant changes occurring in our culture and society as they were in formative seasons of life. This has resulted in not just a generation gap between them and older generations, but also a cultural gap. The resulting worldview emerging in younger generations today is fundamentally different from that of previous generations.

So, what are the cohort effects most influential in the development of Millennials (and following generations)? Of course things like technology and globalization have been significant. Research is now showing that the brains of young people who have been exposed to technology since young ages, for extended periods of time, are actually wired differently. We know that the way communication occurs now is different. In many ways there is nothing new under the sun, but the way old issues manifest has changed. For example, there is still marital infidelity. Whereas an affair was more likely to occur for a working parent at the office while putting in long hours, it is now just as likely for an emotional affair to involve a stay-at-home parent who reconnects with an old friend on social media. While Millennials were introduced to many forms of technology much later in their lives than Generation Z, they represent the first generation of digital natives.

Philosophies of parenting and education also underwent significant changes as Millennials were born. Many of these trends are continuing with Generation Z. Of course, involved parenting, often termed “helicopter parenting,” has been perhaps the most significant of these trends. The self-esteem movement, where everyone gets a trophy, is closely related. Another significant trend that receives less attention is the focus on student-centered learning in education, which has added to the societal focus on providing what a child wants or needs. Like other trends, it has at times stripped young people of opportunities to learn how to overcome obstacles, solve problems on their own, or deal with failure and disappointment.

Most significant of the cohort effects, however, is the fact that Millennials represent the first generation of post-modern natives. Peter Drucker, in his book Post-Capitalist Society, explains, “Every few hundred years in Western history there occurs a sharp transformation…society rearranges itself…its worldview; its basic values; its social and political structure; its arts; its key institutions…we are currently living through just such a transformation.” Postmodernism, a response to the failing promises of the modern era, with its reliance on systems, science, logic and reason to solve our problems, has been the impetus for this transformation. David Harvey, in his book The Condition of Postmodernity, describes, “Somewhere between 1968 and 1972, we see postmodernism emerge as a full-blown though still incoherent movement out of the chrysalis of the anti-modern movement of the 1960s.”

So, what does this post-modern movement mean for Millennials? As it unfolded in the 1960s and 1970s, it gradually worked its influence into the fabric of our society. By the time Millennials began arriving in the 1980s, post-modern ideas were firmly at work in our education system, media and popular culture. Millennials are the first generation to be raised with predominantly post-modern values. While some of them still identify with modern values based on their particular upbringing or education, they belong to a peer culture that adheres to a post-modern worldview, a peer group of post-modern natives.

What are some of the key differences between a modern mindset and a post-modern perspective? As mentioned earlier, the modern era relied heavily on science, logic and facts. Postmodernity values experience, emotion and stories. As a result, decisions made by Millennials and Generation Z are often influenced by feelings versus reason. The rigid systems, hierarchies and structures of modernity are giving way to organic processes, open participation, and networks. Collaborative education has taught students the value of working together, engaging in a process, sometimes without concern for a specific outcome or result. Perhaps the most significant difference is related to views of truth. Modern perspectives held to absolute truth that could be discovered and proven. Postmodern perspectives hold pluralistic views of truth to be equal and believe they are defined in the context of community. As a result, we often find those of older generations strongly committed to their views of truth, whereas younger generations are much more open-minded, but can struggle to articulate personal convictions.

While there are many more differences and nuances, the points above begin to illustrate the fact that we are truly facing a cross-cultural gap as we seek engage across generations. This gap does not always neatly fall along generational lines, with many older individuals identifying with postmodern views and some younger ones still grounded in modern perspectives. However, Millennials are unique as they represent the turning point, the cusp of the transformation occurring in our society, the first cohort of postmodern natives.