DISC Training Workshop for Your Team 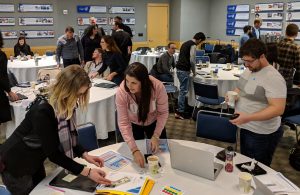 Save travel time and money. Our virtual training techniques and facilitation skills ensure highly interactive sessions. Our DISC training workshop helps individuals understand each other better and appreciate the unique differences each person brings to the team. DISC workshop participants leave the seminar energized and ready to apply the knowledge gained. Employers begin to see the positive changes immediately after the seminar. People will realize their differences can be used effectively to make an organization successful. We conduct DISC training workshops over the web and on-site workshops.

We custom design each workshop to meet the unique culture, dynamics, goals and objectives of our clients. We work directly with senior leadership to understand their unique requirements and expectations. The process starts with a discussion on the theme, goals and the creation of a general strategy or agenda.

Greg’s DISC workshop was one of the best I have attended. Greg is skilled at engaging the class, providing information in a helpful manner, and giving individuals the direction they need to feel competent and comfortable administering the DISC. As a result of Greg’s class, I am looking forward to using the DISC in my organization’s professional and leadership development initiatives. I highly recommend Greg as an instructor!

EXPECTED OUTCOMES FROM OUR DISC WORKSHOP:

Greg Smith and his team of DISC facilitators have conducted DISC team building workshops nation wide. He is the Founder and President of Chart Your Course International Inc. His 30 years of leadership and consulting experience has helped propel him as one of the nation’s leading authorities on employee selection, DISC training workshops, personality assessment training, talent management, employee engagement and organizational behavior.

Our DISC programs are delivered in a 1/2 day or a full day format. If you’re interested in having a one of our trainers come to your facility simply fill out the form below. A representative will contact you within one business day to discuss your organization and objectives for training. Our trainers customize our DISC workshop training course based on the type of organization, number of people and budget. DISC Certification Online Training

Cost of Our DISC Training Workshops

This course can be delivered in a 3.5 hour or a 6-hour format and since participant fees vary based on the number of participants we are not able to post a price. After you submit the DISC training workshop request form we will contact you and provide you a formal outline including an agenda, references and a proposal.

DISC workshops provided in these other cities:

Greg is available for DISC team workshops and team building in Arizona (Phoenix, Tucson, Mesa), California DISC Certification training as in DISC workshop Los Angeles, San Diego, San Jose, San Francisco, Fresno, Sacramento and of course DISC workshops in Long Beach. Texas is one of our favorite states so there are DISC team building workshop in Houston, San Antonio, Dallas, Austin, Ft. Worth, and Austin. Virginia has Virginia Beach and Washington State has DISC workshop for Seattle. Washington, DC, DISC workshop and certification can be taught in Tampa, Florida, Gainesville, Florida, Chicago, and DISC Training Course in Louisville, KY, DISC and Baltimore, MD, DISC certification classes are possible as DISC training in Boston, MA, and Detroit, MI. Kansas City DISC workshop classes are offered. DISC workshop behavior training in cities such as Omaha, Las Vegas, Albuquerque, and North Carolina (Charlotte, Durham and Raleigh DISC workshops certification – train the trainer) classes. New York, NY. DISC workshops located in Columbus, OH, Oklahoma City and Portland OR. Wherever you are, we are available for DISC workshops. We also work with the U.S. military and all military (Army, Navy, Marines, Air Force, Coast Guard) bases such as Ft. Benning, Ft. Bragg and Ft. Hood. The Veterans Administration, VA are major clients of ours too.