It is believed that the workplace suggestion box started with the Japanese in 1721 when the eighth shogun, Yoshimuni Tokugawa…posted the following note: “Make your idea known…. Rewards are given for ideas that are accepted.” Here it is, 280 years after the Japanese suggestion idea, however, only 3 percent of U.S. companies have effective suggestion programs.

It is unfortunate that in this age where organizations are paying expensive consultants to find newer, better, and faster ways of doing things, sometimes the obvious slips right by because the company’s own work force is not consulted.

According to a March 2001 article reported in USA Today, a survey developed by OfficeTeam found, “Only 38% of working men and women feel their managers are very willing to listen to new ideas and suggestions for improvement.” Some organizations do listen, and have benefited from employee suggestions: “Money can be saved in every organization if the management team operates an effective suggestion program,” says Marsha Myers of Lee Hecht Harrison, a global HR Consulting firm. Managers usually overlook the company’s most valuable asset and source of information- their employees. As the economy slows, creative organizations can find new ways to drive revenue and reduce costs by seeking employee suggestions.

It was the janitor’s idea. The famous El Cortez Hotel in San Diego provides an excellent example on the profitability advantage of listening to employees at every level in an organization. The hotel management decided to install an additional elevator to better serve their guests. Engineers drew up plans cutting holes through each floor of the hotel. A janitor, who was concerned with this, made the comment that this would make a great deal of mess. The janitor was told not to worry because the hotel would be closed to guests during the construction. The janitor suggested, “You could build the elevator on the outside of the hotel.” At the time, this architectural concept had never been done before, but after investigation by the engineers, it proved an idea that was worth developing, and is now commonplace in buildings today worldwide. The janitor’s idea saved the El Cortez from lost revenue, employees from losing salary and major clean-up costs related to the construction of the new elevator.

A leak. An employee suggestion involved repairing a leak in a cooling system. The system had leaked for years without anyone thinking much about it. One day an employee submitted a repair proposal that resulted in an annual cost savings of $200,000.

State Government. Randy White, an employee of Oregon State Lottery submitted a suggestion to his manager in July 2001. Randy found a solution to upgrade video-lottery terminal equipment so the equipment would accept the new currency issued last year. Randy recommended replacing 2,500 components in terminals at $12.50 each, compared to the manufacturer’s proposal of $450 per terminal. Randy saved the State of Oregon $1,200,672 and was awarded $5,000.

New Business Line Started. J. Willard Marriott started out with a chain of nine profitable A&W root beer stands according to the book, Marriott. One of the restaurants was located near the Washington, D.C. airport that attracted traveling clientele. One employee noticed that passengers on their way to catch a flight would purchase meals and snacks stuffing the food into their carry-on luggage. The trend continued to grow and the employee mentioned it to his boss. This communication with an employee resulted in the store establishing a delivery of prepackaged box lunches directly onto the tarmac. Several months later, the service expanded to American Airlines catering to 22 flights a day. This airport food service has now evolved to more than one hundred airports.

A Manufacturing plant in Livingston, Tennessee credit employee participation with keeping the plant open. They have had no layoffs since 1994, have a turnover rate of only 1.6%. In one year, the plant doubled in size growing the workforce from 70 to 187 employees. In 1999, employees generated an average of 8.5 suggestions each saving $741,761 in one year. The management team encouraged and rewarded innovation.

City Savings: Caryn Thompson, who works in the Oakland county Children’s Village juvenile detention facility, saved the county about $11,800 a year just when suggesting the youngsters receive a routine medical test at the facility instead of transporting them and the staff to a doctor’s office.

Furniture Idea: Miller Furniture has benefited from employee suggestions since the beginning of the early 20th century. The owner valued his employees for their innate talents and implemented an employee participation plan that included bonuses for helpful cost cutting suggestions. It was an employee suggestion that led to the creation of the first cubicle office furniture units, now one of their best selling products.

Large Organization Benefits: In February 2000, Southwest Airline CEO Herb Kelleher sent a letter concerning the current fuel cost crisis to the home of every employee. “Jet fuel costs three times what it did one year ago. Southwest uses 19 million gallons a week. Our profitability is in jeopardy,” he wrote. He asked each worker to help by identifying a way to save $5.00 a day. The response was immediate. A group of mechanics figured out how to reduce the cost of heating the aircraft. Another department offered to do its own janitorial work. Within six weeks of the letter being sent to the employees, this large organization found ways to save more than $2M.

Marine Manufacturer. A boat manufacturer used paper in their lamination department to prevent buildup of fiberglass on the floor. Before, each shift, the floor was covered with paper, and then the paper would be discarded at the end of the shift. An employee in the materials management department suggested an alternate supplier who could provide recycled paper at an estimated savings of $500K per year. The organization provided the employee with a check for $3K;lots of corporate recognition and the community appreciated the environmental-conscious neighbor.

A number of organizations provide ideas on how to run an effective employee suggestion program. According to Tom Jensen, who now runs The Center for Suggestion System Development in Orlando advises, “Successful suggestion programs all have one thing in common: quick, thoughtful responses. Suggestions should be acknowledged within 24 hours.” While most would agree with this sense of urgency, some other aspects are just as important. Areas like building trust and integrity into the program. The rules governing the level and type of reward is also paramount to any program.

In an article in the February issue of Public Relations Tactics, author Grunig suggests the need to “revamp” many of the existing employee suggestion programs. He says that surveys show that suggestions are not answered. “It’s like dropping something into the black hole,” remarked one employee. In fact, of the 200 employees interviewed for his survey, less than half have ever made a suggestion and only 10 percent ever received an answer. “I get a form letter saying ‘Thank you for your letter, blah, blah, blah,’” said one. Adding to this, one worker at a manufacturing firm dropped a note in the suggestion box that said, “Does anybody read these suggestions?” She has yet to get a response

Unless an organization is prepared to address every suggestion – the suggestion program should be abandoned as it will only demoralize employees adds Marsha Myers of Jacksonville, Florida’s Lee Hecht Harrison, a global HR consulting firm. Another look at flawed suggestions programs comes from Geoffrey Lloyd of the Cranfield School of Management. According to Geoffrey, one reason employee suggestion programs most often fail is because senior managers are not supportive of the process.

As many organizations have seen the effectiveness of an employee suggestion program. It can be a positive force to motivate, improve performance, productivity, safety, and contribute to the bottom line.

Submitted by Freda Turner who is affiliated with Doctoral and Graduate Studies Programs at University of Phoenix and Embry Riddle Aeronautical University.

The Bright Ideas Campaign is a multi-purpose employee suggestion campaign to target one or more of the following: 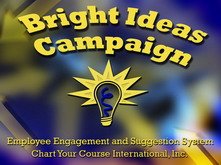 The Bright Ideas Campaign includes the instructions, training materials and facilitator guide to run your Campaign. This allows you the ability to customize the Campaign to your requirements.