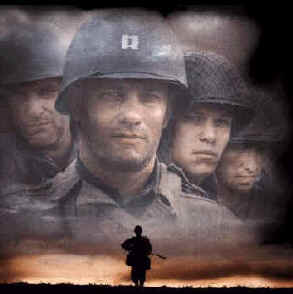 The movie Saving Pvt. Ryan hits you with shocking realism.  From the beginning to the end, you feel as if you are there.

The knots twist in your stomach waiting for the landing craft gate to drop. Cold water fills your boots as you slog your way up the beaches of Normandy and across the bombed out cities in France. You can feel the grit under your fingernails and the dryness of fear in your mouth.  As you hear the bullets whiz by your head and you think to yourself,  “Will I freeze up or will I do what I am supposed to?”

In the seconds before the charge, the eyes of the soldiers turn and gaze upon the person who is their leader.  They think to themselves, “Is this person worthy?” Trust, confidence and leadership must be present before the first battle begins.

Today’s workplace sometimes resembles more of a combat situation than anything else.  Are your people following you or have they deserted and heading in the opposite direction?  People today want leadership, they are not happy being managed.

This movie clearly showed what it means to be a leader.  It was a fascinating work of art—sometimes horrific, but entirely accurate.  The genesis of my fascination was I could see myself.  I spent many years as an officer in the Army.  I never faced combat, but have been in enough demanding situations to understand the bonding soldiers feel when faced with life and death situations.  I gained the satisfaction of knowing, when called, my soldiers would give their all for each other and their country.  As an officer in the Army, I learned several lessons.

A job title doesn’t make a person a leader.  Leaders must first travel down the gauntlet with those they lead BEFORE they are accepted as the leader.  Joel Barker, the paradigm expert, has the best definition of leadership.  He says, “Leadership is about taking people to a destination they wouldn’t go to by themselves.”  To reach that “destination,” a leader must endure a “baptism by fire.” He or she must PROVE themselves first.  Until you prove yourself as a leader you will not have the respect and trust from those you are suppose to lead.

The title “leader” is not something you call yourself.  Like a crown, those you lead place it upon your head.

The supreme test of leadership is the ability to lead people in combat.  There is nothing scarier than facing the possibility of death in war.  No matter the situation–war or peace, authentic leadership and a clear sense of purpose are the key ingredients making the difference.

Capt. John Miller (Tom Hanks) was faced with the almost impossible mission to lead a squad of soldiers to find and bring Pvt. Ryan back home.  The most fascinating aspect of this movie was the portrayal of leadership and the magnetism between the soldiers, the mission, and their Captain.  It was the Captain that formed the glue that held that unit together.  Looking at the movie you can see three important shifts or transitions in Capt. Miller’s leadership style.  I call these three shifts the “Faces of Leadership.”

Face of Fear-The lowest level or form of leadership is by fear.  On Omaha Beach, orders were direct and to the point.  Life or death-do what you are told because there is little time to think.  Anyone who has been in combat or in a trauma situation understands that people don’t always act rationally in a crisis.  Even the Captain slipped into a momentary “thousand yard stare” when the ravages of combat became overwhelming.  Actions become instinct driven–survival.  Leaders have to think, must push themselves forward and give orders for the group.  What is good for the group must outweigh what is good for the individual.

Face of Respect-I enjoyed watching how the soldiers bantered back and forth about what was the Captain’s career before the war.  He had a charismatic affect on his men based on trust and respect.  He only revealed enough about himself to maintain professional objectivity.  He couldn’t afford to do anything that would compromise the mission.  His troops even started a lottery for the person who could guess what the Captain did for a living before the war.

Early in my career, I faced a similar dilemma.  I worried about being liked by my soldiers. Should I be feared or should I be respected?  I resolved this dilemma though trial and error.  Leadership is a developmental process.  There are few, if any, born leaders. Leadership is both a science and an art form and the good leaders learn from their mistakes.  The Faces of Fear and Respect can only take you so far which leads us to the next level.

Face of Purpose- The highest level of leadership is that of providing purpose.  True leadership progresses from fear, to respect and finally to that of purpose.  During one scene in the movie, you could feel this important transition. As the squad fought deeper into enemy territory, Captain Miller’s men find themselves beginning to doubt their leader and their orders.  They demanded, “Why is one man worth risking eight…why is the life of this private worth more than ours?”

But first, another firefight took the life of another comrade.  The scene unfolds on the hill of the enemy radar station. The trigger finger of the First Sergeant held life and death in balance as he pointed his pistol at the American soldier who prepared to desert the unit. Life and death hung in the balance for what seemed forever until the Captain spoke.

He told them the secret, what he did before the war.  He was a school teacher.  Silence. . .you could feel the explosive pressure evaporate.  You could almost hear the soldiers say to themselves, “Damn, if he is a school teacher, what am I complaining about!”  It was at this moment, the final shift occurred.  The men no longer needed or depended on the Captain.  There was complete alignment between what they had to do and how it could make a difference to their world.

Every Army unit has a flag called a guidon.  Each unit guidon has its own unique design and color.  The guidon stands apart from other military units.  The challenge facing all leaders today is to create their own “guidon” based on the Face of Purpose.

Hopefully, none of us will have to face combat again and my thanks go to those who have.  But let us be ever mindful, it is leadership that makes an exceptional difference—in war or peace.