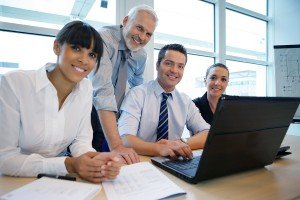 360 Assessments and Reviews for Employees, Managers and Senior Executives

360 degree assessments and reviews are powerful tools for helping individuals improve, grow and develop their interpersonal skills. Our assessments gather information from several people about an individual’s performance as seen by his/her boss, self, peers, direct reports and customers. Traditional performance evaluations are subjective and one-sided. Most traditional evaluation systems are ineffective in providing honest and objective feedback.

A better way is the 360 degree feedback assessment process. No matter what position you hold in a company, it is important to understand how others (boss, team, peers and customers) perceive your effectiveness as a leader–strengths and weaknesses. 360 feedback input from supervisors, co-workers, clients and direct reports is valuable in improving organizational and individual performance.

Many organizations choose us to conduct 360 assessments on their senior level managers and executives. As an option, we can provide both personal coaching and/or a debriefing to the rated individual. We will assist the rated individual in developing an action plan in a confidential and professional manner.

Studies show 360 degree feedback assessments can have a positive economic impact when used for leadership development. A study by J. Folkman showed the relationship between turnover and leadership effectiveness. He showed effective leaders have lower turnover of employees under them. Another study showed performance-based assessments and development can result in a 6 standard deviation improvement in employee performance, yielding a return on investment as high as 700%

How Does the 360 Review Process Work?

360 Leadership Survey: Executives, managers and supervisors can better understand their respective strengths and areas for development.

Individual Skill Development: Members of the team give each other feedback about personal leadership abilities, team interaction and workplace skills.

360 Team Development: Analyze teams by receiving input from customers and other stakeholders.

We have several types of 360 assessments available. Here are a few sample assessments.

This report is our standard 360 for supervisory, sales and managerial personnel. It measures 6-7 different competencies and 45-50 behaviors and practices with 3 open-ended questions.

We can custom design 360 assessments for senior level managers and executives.

This report type represents the average of responses to a survey question or group of questions (category). The mean is calculated by adding all the responses to a given question and dividing the sum by the total amount of responses. The result is indicated by a number and graphically displayed as a bar graph.

If an answer option has been identified as a “No Response” (such as “Don’t Know,” or “Not Applicable”), those responses will be automatically excluded from the calculation of the Mean score. This ensures that the average is based on the “meaningful” responses.

We recommend that you use the Mean Report when you need an overall summary of survey results. The Mean report will provide an at-a-glance look at the data which is very valuable when you are looking at large amounts of data or when you simply need the average scores.

This 360 survey report shows the percentage of respondents who gave favorable, neutral and unfavorable scores. Negative responses are typically associated with options like: Strongly Disagree, or Disagree.

Each 360 report provides a comprehensive description of all the written comments provided by survey respondents. The comments are listed in sequence and separated by a thin horizontal line. When a survey participant provides no written comments to an open-ended question, the report shows nothing in between the separating lines. We can provide as many open-ended questions as your need.

The Written Comments Report is extremely useful to understand qualitative feedback. We recommend you read the comments provided before making interpretations on the numerical data.

Our team of 360 consultants are available to provide you personalized support and help you benefit from your system. We are particularly interested in helping you implement the program, establish baselines and provide interpretation and developmental insights. Our firm is committed to helping you maximize your productivity and profits through better employee selection, retention and development.

What is 360 degree feedback?

In short, the participant is surrounded by feedback. 360 degree feedback allows the participant to receive feedback from people above, below, and at the same functional or hierarchical level. Participants assess themselves as well.

What are some effective ways to introduce 360 feedback system?

What are some ineffective ways to introduce 360 degree performance evaluation?

One of the most ineffective ways people introduce a 360 degree feedback process is to select a single person to evaluate it (versus say a group of 10 to 50 participants). A second ineffective method is to select people who are on disciplinary action, are about to be fired, or are among the least productive performers in the organization.

Who provides the feedback?

Can the data predict anything?

While we prefer not to get involved in the prediction business, the short answer is Yes. However, many participants feel that their feedback is a reflection not of their behavior, but of those with whom they have to report to or work with. Possibly. Our research suggests that when the survey is written in observable, behavioral language the feedback clearly reflects the behaviors of that participant. Further, when a participant moves to another location or inherits an entirely new boss, staff, and/or peer group and chooses not to modify his or her behavior based on the feedback results, then there is a high probability that those same areas that were previously seen as developmental needs will continue to be seen as weaknesses by this new population.

What are some major concerns about using 360 assessment?

Been there, done that is cited as another concern. Part of the problem stems from the fact that those responsible for implementation want to get it over with quickly and assess the entire population at one time. Rather than see the process as ongoing, it is positioned as basically a one-time event that everyone will participate in, kicking and screaming or not. Then there is utter surprise and dismay when the rate of return is not as high as it could be, that the data are not as revealing as it could have been, that people are criticizing the instrument, the process, the lack of time to respond, the lack of positioning, and on and on.

A third concern is that participants are not always told, upfront, what the feedback will be used for and who else will see their data, when. This can cause mistrust in the process.

This concept eliminates the highest and lowest scores for each item on the survey. As a result, Olympic scoring provides a "better score" for the participant when these high-low scores are dropped. Is this your goal?

We prefer to treat the participant as an adult. We show all the data. We also display the response distributions for each item and let the participant understand that not everyone thinks the same. Not everyone has the same expectations of everyone else in that group. We focus on descriptive behavior, not scores.

Rather than focus on a score, focus on what behaviors are in need of improvement, according to the majority of the respondents, or according to a particular rater group. When you focus on the score, there is a tendency to lose sight of what issues need to be built upon, which to change and improve upon.

Why so some people resist changing when they receive their 360 feedback?

There are a lot of different reasons. For some people, if they learn that something has to change about how they do things, they tend to see such change as a criticism of what they have been doing all these years. They become defensive and protective of their past and existing behavior and processes. As a result, change is seen as not needed. Things continue as before.

How long should a survey be?

Contrary to popular belief, there is no magical length for a feedback survey. Yes, the shorter the better, especially if people are in a hurry or do not want to be bothered by an overly long set of questions.

A more professional approach is to first identify the themes or competencies you want to measure. Next, we suggest you include at least five questions (behaviors and practices) for each theme or skill competency you want to measure. So, for example, if one of your skill competencies is Delegation, we recommend at least five items for measuring it, and so on for the other competencies in your survey. If you use this as a guideline, then you can easily dictate the length of the survey that is right for your target population.